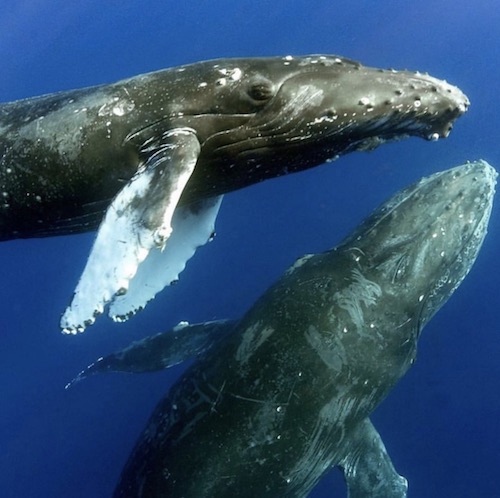 Whale Watching season in Maui is one of the most adventurous marine mammal encounters you can have! This is one of the last great animal migrations and it happens every year as humpback whales travel between Alaska and Hawaii.

Humpback whales arrive at different times in the fall, sometimes as soon as September but more typically we begin to see them in October. There are a few sightings in the early fall and by November. We see humpbacks whales on many of our ocean adventures. Sighting whales from the beach is rare during the fall months as only a few whales have begun migrating to Maui.

But by the beginning of December more whales arrive and we can spot them from  land, breaching and spouting warm air from their blowholes like puffs of smoke! Sometimes the light refracts off this puff of air and water creating a rainbow above the whales blowhole!

Whale Watching season in Maui is one of the most adventurous marine mammals encounters you can have! This is one of the last great animal migrations and it happens every year as humpback whales travel between Alaska and Hawaii.

Humpback whales arrive at different times in the fall, sometimes as soon as September but more typically we begin to see them in October. There are a few sightings in the early fall and by November we see humpback whales on many of our ocean adventures.

Sighting whales from the beach is rare during the fall months as only a few whales have begun migrating to Maui. But by the beginning of December more whales arrive and we can spot them from land, breaching and spouting warm air from their blowholes like puffs of smoke! Sometimes the light refracts off this puff of air and water creating a rainbow above the whale’s blowhole!

Although the official whale season in Maui doesn’t start until December 15th, we begin whale watching on December 1st and are guaranteed humpback whale sightings! Smaller, quicker vessels, like ours, can maneuver better and the proximity to the water makes them ideal for spotting whales! The best months for whale watching in Maui are the winter months, from December through April.

In the first month of whale season in Hawaii, there are fewer whales. But the whales that migrate first tend to be juvenile humpback whales, which means they are curious and we often have close encounters with them as they approach our vessels to learn about us!

We think we are whale watching, but they are people watching! Whale watching in December gets much busier as the holidays approach. Many island visitors want a tropical Christmas just like our humpback friends who are being spotted on every whale watching trip and demonstrating fun surface behaviors! 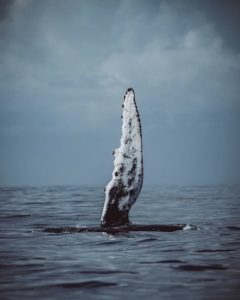 It is estimated that 12,000 whales migrate to Hawaii and by the winter season we are beginning to see more of these numbers arriving on Maui. January is a great time to visit Maui as the warm tropical beaches and whale watching make for a nice break from the mainland’s snowy weather and busy holiday season.

By February, everywhere you look you see whales! The majority of the whales that migrate will all be here during this month, making it one of the best months for whale watching in Maui. The Maui Nui Basin became a federally protected sanctuary for humpback whales in the 1990s because so many migrate to this little area of water in the Pacific Ocean. You may see whales around the other Hawaiian Islands but they do not congregate in any other area as they do here in Maui.

The time frame for whale season in Hawaii (December 15th- April 15th) was chosen as a time to enforce certain protections, for the humpback whales because that time frame is when most are in Maui). Some of these seasonal protections include ceasing the use of jet skis as well as parasailing tours, to prevent any collisions with swimming whales. 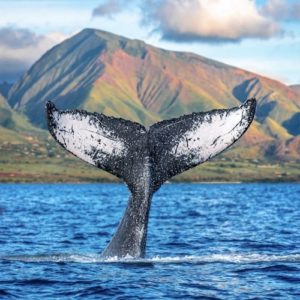 Although whales are not more or less active during any particular time of day or month, when there are more in one area, our chances to observe more activity increase. Most whales have not begun their migration back to Alaska yet, so March is also one of the best months to whale watching in Maui.

While the humpbacks are in Maui they are mating, giving birth, and teaching their young important life skills like breaching. We often see mom and calf pairs breaching side by side! Another frequent behavior to see is competition pods (comp pods) of male humpback whales, all competing for the attention and right to mate with a particular female humpback whale. Some of these pods will travel in groups of upwards of 50 or more animals! What a sight to see!

Occur when humpback whales lift their fluke (tail) out of the water and slap it back into the surface! This is typically performed by a female (cow) humpback whale trying to attract the attention of male humpback whales for mating purposes.

This is also performed mostly by female humpback whales. She will raise her pectoral fin (arm fin) and slap it on the surface similar to a tail throw! And yes it’s also to get the attention of the male humpbacks!

This is when a humpback whale floats with its head out of the water and its body vertically under it! Our humpback friends are getting a lay of the land, and viewing its surroundings!

When any of these behaviors occur, or when a whale swims near a vessel (within 100 yards), it’s called a mugging! This is a close encounter as our vessels are low to the water and small groups so every seat is a front-row seat!

When April rolls around, many humpback whales are already beginning their migration back to Alaska. How long they stay in Maui depends on many variables, most importantly, food and water temperature.

Researchers have observed that when there is less food available in Alaska, the whales stay longer in Alaska to get more feeding time. This includes returning to Alaska sooner as their nutrient supply begins to run low while in Maui.

Commercial fishing has one of the most negative impacts on humpback whales’ food source because the food the whales eat is often caught and fed to larger fish which are then harvested and sold commercially.

Water temperature also plays a role in their migration, as water temperatures have risen, there are more places for humpbacks to spend their summer months and the Alaskan waters are not as cool, so they may reside in the northern waters longer.

The Worst Months for Whale Watching in Maui

The worst months for whale watching in Maui are the summer months because the humpback whales have returned to Alaska where they spend their summers feeding on krill, plankton, and small bait fish. Observing their activity during feeding months (May – October) is very different than their surface behavior seen in Maui during winter months!

What triggers their 3000-mile migration? The cooling of the Alaskan waters and the filling of their bellies. Once humpback whales begin their migration to Hawaii, they will not feed again until their return to Alaska. Instead, their bodies process their stored fat as their daily nutrition during the winter months of their migration to Maui.

During Maui’s summer months we dolphin watch and snorkel instead! We often see other unique marine species this time of year like false killer whales, whale sharks, and melon-headed whales!

Whatever time of year you visit Maui, there will be amazing marine encounters and adventures awaiting you! Check out our whale watching or snorkel tours for more info!

when is whale watching season in Hawaii?

Whale watching season usually begins in November and lasts until March. The best time to view whales is between dawn and dusk when they are most active. Whale-watching tours typically last 3-4 hours, but you may want to check with your tour operator about the specific times that their vessel will be sailing.

when is whale watching season in Maui?

Whale watching season in Maui typically runs from December to May, weather permitting. However, the best time to view whales is usually during the spring and fall months when they are feedings.

You can watch these amazing creatures up close as they feed on selectively caught species of prey near shorelines. Watching them breach and tail slap has a truly unique experience that is hard to find anywhere else in the world!

what month is best for whale watching in Maui?

Whaling seasons can vary from year to year, so it is important to check the schedule of organizations before making a trip. However, in general, September and October are generally considered the most popular months for whale watching in Maui.

This is due to the availability of Right Whales (baleen whales) that migrate south for the summer breeding season. And while these animals may be visible anywhere in Hawaiian waters during their migration, they tend to congregate near shore during the fall and winter months.

So if you’re looking for an unforgettable experience with some beautiful marine creatures, then the Ultimate whale watch might just be perfect for you!

when can you see whales in Hawaii?

While whales can be seen in Hawaii at any time, the best time to see them is between March and November. This is when they are migrating south for the winter. There are many activities available that allow you to witness these magnificent creatures up close, from whale-watching cruises to underwater photo safaris.

can you see whales in Maui in may?

Yes, whales can be seen in Maui during May. This is due to the annual migration of humpback whales that pass through the area on their way south. Whale-watching tours are available from many locations around the island and provide a unique opportunity for visitors to see these majestic creatures up close.

when do the whales come to Hawaii?

Whales typically come to Hawaii between December and March. This is depending on the location and season, but this is when they are most commonly seen in waters near the state.

when are humpback whales in Hawaii?

Typically, humpback whales are sighted in Hawaii during May and June. They migrate north from their birth locations in Mexico, Central America, and South America to feed on krill along the way. Humpbacks are one of the most endangered species of whales due to whaling practices over the years, so watching them up close is a valuable experience for everyone!