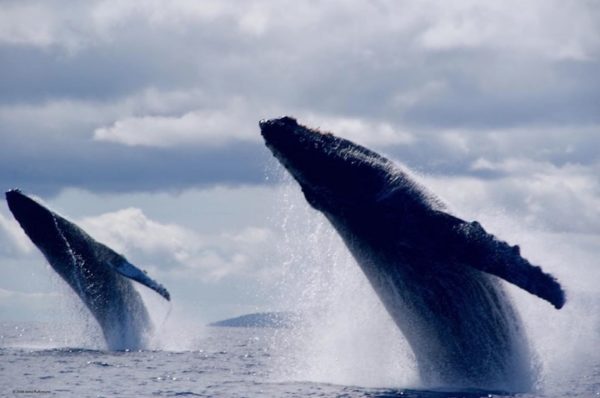 The last great animal migration of the humpback whales from Alaska to Maui, Hawaii every year is a magical experience. These gentle giants travel thousands of miles to the warm tropical waters of Maui where we are lucky enough to encounter them on our whale watching tours.

We love learning about humpback whales and have some fun facts to share with you!

Size and Weight of Humpback Whales 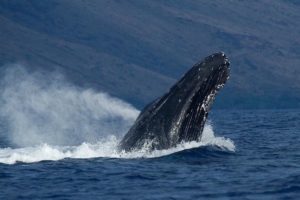 Humpback whales don’t really have a humpback! They are named for the way they hump their back and they prepare to move below the surface and dive.  One specific physical characteristic of humpback whales is their large pectoral fins.

Fluke (or tail) markings are unique to every humpback whale. Scientists have begun documenting specific whale flukes to follow and learn more about whale behavior and how the environment is affecting their migration, mating and feeding habits.

Happywhale is a website where you can share your photos of whale flukes and find out if you sighted a whale that has already been named and documented or are adding a new addition to the scientists list of whales!

Humpback whales are a type of baleen whale, the largest mammals on earth and there are more than a dozen species of them! They are called baleen whales because they have baleen, a fringe like filter in their mouth used to capture small fish and plankton for food!

Another characteristic that differentiates baleen whales from toothed whales is a pair of blowholes they have (other types of whales only have a single blowhole).  Humpbacks are also a part of the subspecies of rorqual whales because they have ventral grooves in their throats that allow them to gulp large amounts of water to be sifted by the baleen for feeding purposes.

There are estimated to be 40,000 humpback whales in the world, about ⅓ of the original population. Before protection acts were put into place, humpback whales were hunted and eventually reduced to such a small population, they became endangered.

Humpback whales live to be about 45-50 years old and typically die of natural causes, although their young have predators, mainly the Orca or killer whale.

What do Humpbacks Eat?

Humpback whale’s heads have large tubercles that look like knobs, each with a hair that scientists suggest is used as motion detectors. Humpback whales perform many surface behaviors that are believed to be used to communicate with other whales, sounds of splashing, surface slapping and tail throws used to draw attention for mating purposes.

Although we don’t know for certain, whale breaching is believed to be a form of this communication as well as a way for whales to clean their bodies of barnacles, parasites or other animals/objects adhered to them.

Physical touch is also a part of whale communication. Male humpback whales use aggressive physical maneuvers in competition pods to fight other male humpbacks for a mate’s attention.  Mom and calf pairs have been observed touching fins to communicate closeness and care.

Mom and calf pairs also use quiet vocal noise to communicate during migration, keeping their voices at low decibels as to not alert predators. Louder whale songs that we can hear are another form of communication that still leaves much to be understood by scientists.

What we do know, is that only male humpback whales sing and they sing when they are alone, hoping to attract a mate. When on a whale watch, you can place a device in the water, called a hydrophone, or waterproof microphone, to amplify the song so you can hear the whale’s song above water!

Whales have vocal chords like us! What makes them special is their ability to move air across their larynx, without losing oxygen underwater (remember humpback whales are mammals, not fish so they need oxygen from above the surface to breathe). In humpback whales, the male’s larynx is much larger than the female’s, it is made this way to produce their loud vocal songs.

One of the most fascinating discoveries of whale songs is the song itself. It changes seasonally and can be a different song in different locations around the world, but sometimes a single song somehow passes through the distance of the ocean and can be heard by whales around the globe!

They spend their summers in Alaska, feeding, but as the waters begin to cool, the humpback whales join each other and travel to Maui and other tropical climates for the winter months.  Humpback whales do not feed during the winter months, making their surface behavior very different, season to season! Once they reach warmer waters like Hawaii, they began engaging in other important behaviors including mating and birthing.

The Maui Nui Basin became a protected area for humpback whales in the 1990’s because of the large number that migrated to this one area of Hawaii. NOAA put protections in place including the regulation to not approach whales closer than 100 yards. Humpback whales do not have to adhere to this regulation though and often approached vessels closer than 100 yards which is called a mugging!

If a vessel is being mugged, they are not permitted to operate their engines for fear of harming the animal. Exceptions are made for trained officials responding to an entangled whale.

Ultimate Whale Watch was the first commercial outfit to become a first responding team to whale entanglements. Our team is trained to spot and notified NOAA of entangled whales and also dispatch a vessel to free the whale from entanglement!