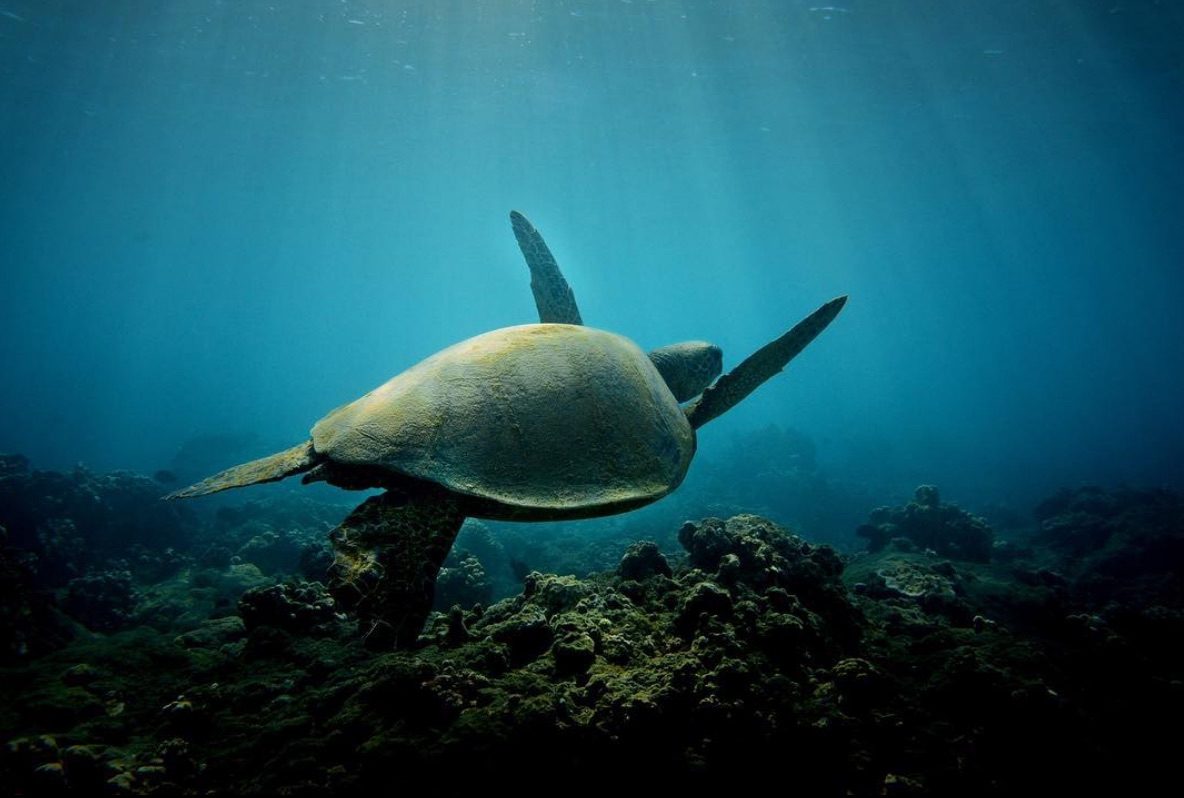 Other native species include the Leatherback sea turtle and the Hawksbill sea turtle. Green sea turtles can also be found all over the world, living on more than 100 countries’ coastlines, they prefer tropical environments.

How Old do Green Sea Turtles Get?

Most sea turtles live an average of 50 years but the green sea turtle lives the longest, typically living 80 years or longer. They reach sexual maturity between 25-35 years of age, males mating every year and females migrating back to their place of birth and mating every 2-5 years.

The mating process can take several hours either at the surface or underwater, the female supporting the male on her shell while also returning them to the surface to breathe.

How to Tell Female Green Sea Turtles from Males?

There is a simple way to distinguish the gender of a green sea turtle: The females have short tails and the males have long tails. This is where sea turtle’s reproductive organs are located: at the base of their tails.

The females lay more than 100 eggs just a few weeks after mating and may repeat this nesting process several times during that season. Females lay their eggs and return to the ocean, leaving their young alone. Baby turtles hatching after 2 months of incubation and begin their journey to the ocean’s edge.

Green sea turtles have a smooth wide shell and beak, typically brown or black color with a lighter yellow-colored underside and distinct scales between their eyes. They move gracefully in the water, using flippers (with visible claws) to propel them forward. When we think of turtles we often think of a slow-moving creature, racing against a rabbit. But these sea turtles are much faster and can reach speeds of 22 miles per hour while swimming in the ocean.

Although they live in the water and on land, these sea turtles are not classified as amphibians but as reptiles. They are not considered very social and you usually see them alone, except for cleaning stations or occasionally they will beach somewhere together. 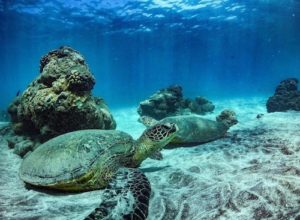 How Big Can Green Sea Turtles Get?

Chelonia Mydas (the scientific name for green sea turtle) was named for their body fat which is a green color because of their diet of algae and seagrass. Juvenile sea turtles are omnivores and eat a mixed diet of plants and small insects, including worms and crustaceans, eventually transitioning to a purely plant-based diet.

Do Other Animals Prey on Green Sea Turtles?

On the other end of the food chain, green sea turtles are prey to other marine creatures. The most vulnerable time in a sea turtle’s life is the early days of hatching. Defenseless, soft-shelled, and small, approximately 90% of sea turtles are killed by predators including insects, dogs, and birds during this stage of life.

Once in the water, the juvenile turtle has to learn to hide from ocean predators including dolphins, tiger sharks, and killer whales as well as fisherman’s lines and nets that entangle the turtles, leaving them maimed or causing them to drown by keeping them from returning to the surface to breathe. A resting green sea turtle can hold its breath for 4-7 hours, but active green sea turtles need to return to the surface more often.

When the water visibility is poor, sharks can often mistake a human for a sea turtle (green sea turtles are tiger shark’s main diet staple) which is the most common reason for the few shark bites we have in Hawaii. This is why we do not recommend entering the water when there is poor water clarity. Thankfully turtles were given amazing hard shells to help protect them in many circumstances and their colors act as camouflage.

The green sea turtle population is considered endangered, there are less than 100,000 nesting females left. This is why protections are still in place to continue to restore their population.

Never touch a sea turtle (this is actually against the law!) and give turtles their space so they can interact naturally in their marine environment as well as come to the surface to breathe. Violating the protections of the sea turtles can lead to $100,000 in fines and even jail time.

Our interactions with green sea turtles in Maui have been their number one threat to their survival.

Their environment can be protected by us in many ways. Reducing plastic waste and dumping makes for cleaner water and reef that is much healthier, providing food for sea turtles. Beach and underwater cleanups removing trash, fishing line, and nets help protect sea turtles from entanglement. Harsh chemicals, including chemical sunscreen, kill the coral reef, which provides food for green sea turtles. Always use reef-safe sunscreen, zinc base, and Oxybenzone when swimming in our ocean.

Because of coastal development, many of the green sea turtle’s nesting places no longer exist. Being conscious of where we are building and also protecting the remaining nesting locations is of vital importance. Although green sea turtles can bite, that’s not why we give them their space. They are generally known for their gentle nature and we want to observe them from a respectful distance for their safety, allowing them to go about their feeding, breathing, mating, and nesting routines without interruption.

Even if you don’t live near the ocean, reducing your single-use plastics and use of chemicals affects our entire planet and our oceans, which directly impacts green sea turtles. You can play a part in helping their population recover by keeping their habitats clean and safe!

Hawaiian green sea turtles eat a variety of things, including jellyfish, algae, coral reef fish, squid, and small mammals such as rats. They are especially fond of mollusks such as clams and snails.

A sea turtle is not an aggressive animal at all. Normally, they are docile creatures that only bite when threatened. A sea turtle bite is extremely rare and generally not dangerous.

Sea turtles are long-lived species and reach sexual maturity at an age of 20-30. Researchers have found that green sea turtles can live up to 80 years old using a new methodology called “skeletochronology.”.

How many Hawaiian green sea turtles are left?

It is estimated that about 4,000 green turtles nest on French Frigate Shoals in the Northwest Hawaiian Islands throughout the year, so their population is still threatened. They nest in isolation because of their small population (fewer than 4,000 nesting females) and 96% of their nesting occurs at this atoll, which is vulnerable.