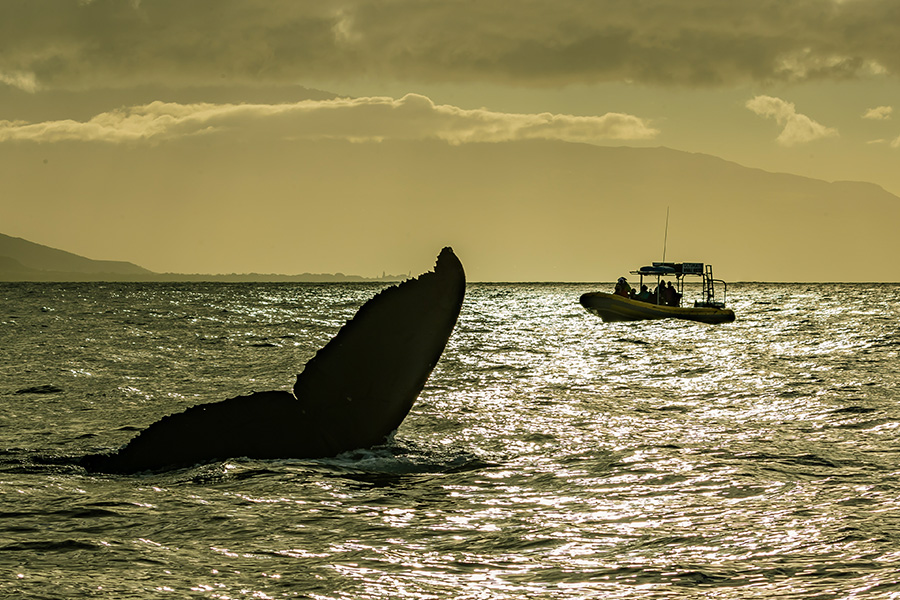 Ever wonder what whales are doing when they pop their heads out of the water or flip their tails? Scientist have spent time studying whale behavior, creating terminology and analyzing these surface behaviors, so we’re going to give you a crash course in their finds!

When a humpback whale lifts its giant fluke or tail out of the water and throws it back into the ocean it’s called a Tail Throw. This is performed many times by female humpback whales that may be attempting to attract the attention of male humpbacks interested in mating.

This is something we have been seeing alot this season in Maui, but scientists have yet to discover the purpose of this humpack whale behavior. The humpback whales will be seen with their tails standing vertically out of the water for extended periods of time which appears to be a resting position. Every humpback whale tail/fluke is unique like a fingerprint, so if you get a photo of this you can submit it to HappyWhale.com.

Mugging is when a humpback whale approaches your boat closer than 100 yards on its own. Our boats are small and non-threatening, which encourages these curious, gentle giants to swim right up to our boat and check us out!

Breaching is that epic movement when the whale propels itself out of the water, creating a powerful display above the water and landing back on the surface creating a giant splash. Scientist believe this movement could be for many reason, either cleaning barnacles and other debris from themselves, playful behavior, or in young calves, the movement is very important for their development.

Now you can take your friends on a whale watch and be the naturalist onboard, teaching them about humpback whale behavior!