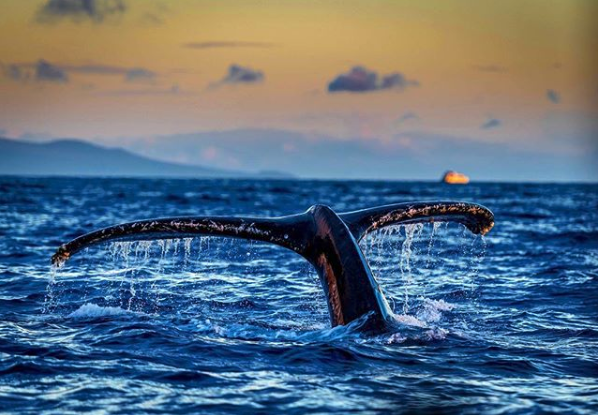 If you are interested to see the whale in Hawaii then you must have to know the Best Island to see Whales in Hawaii? so let’s find out!

Every year thousands of humpback whales make their way from Alaska to Hawaii, to find comfort in the warm tropical waters for breeding, birthing, and raising their calves.

So, where do humpback whales spend their time when they are in Hawaii?

More than 10,000 humpback whales migrate to Hawaii every year, they settle in the waters around Big Island, Kauai, and Oahu, with the majority of the population traveling to the Maui Nui Basin, the waters between Maui, Molokai, and Lanai. Because Maui is the most saturated with humpback whales of all the islands, it became a protected sanctuary for them in 1992 when NOAA began developing protection acts for the endangered species.

The Hawaii Island Humpback Whale National Marine Sanctuary Division of NOAA created maps tracking the migration of humpback whales to Hawaii islands. These maps show us where the majority of the population spends their time in the tropical waters. With the help of these whale maps, we can see where the humpback whales are located, making it easy to select the best places for whale sightings in Hawaii! Using the NOAA map for whale locations in Hawaii is a great way to create a whale sighting map and determine the best place to see whales in Hawaii! 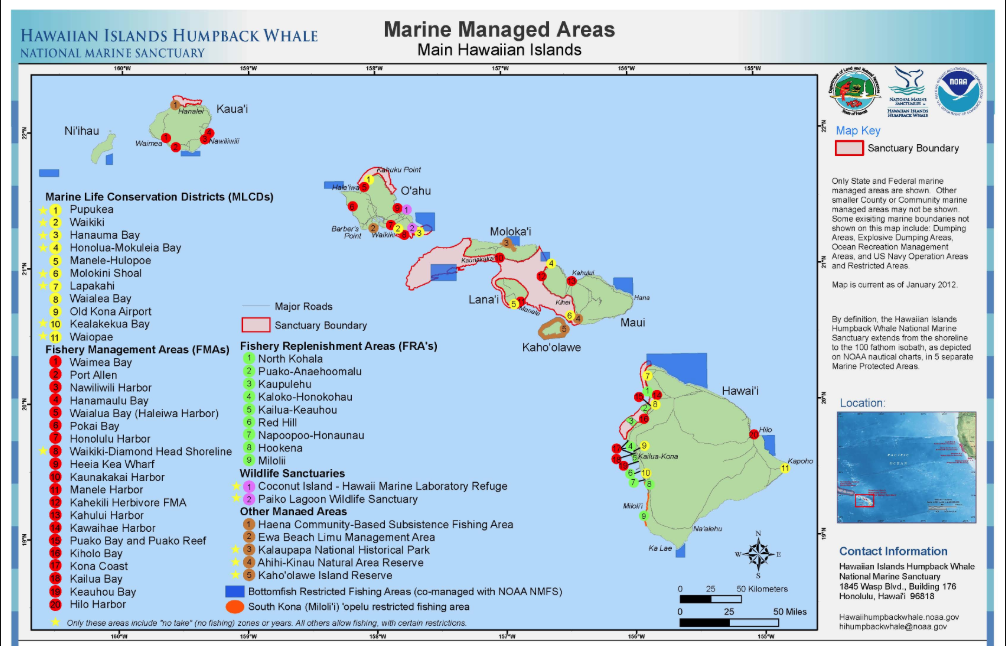 The glowing areas noted on this map #2 Humpback Whale Surface Sightings, track how many whales populate these waters seasonally. The darkest red areas show the most whale sightings, once again in the Maui Nui Basin between the islands of Maui, Lanai, and Molokai. 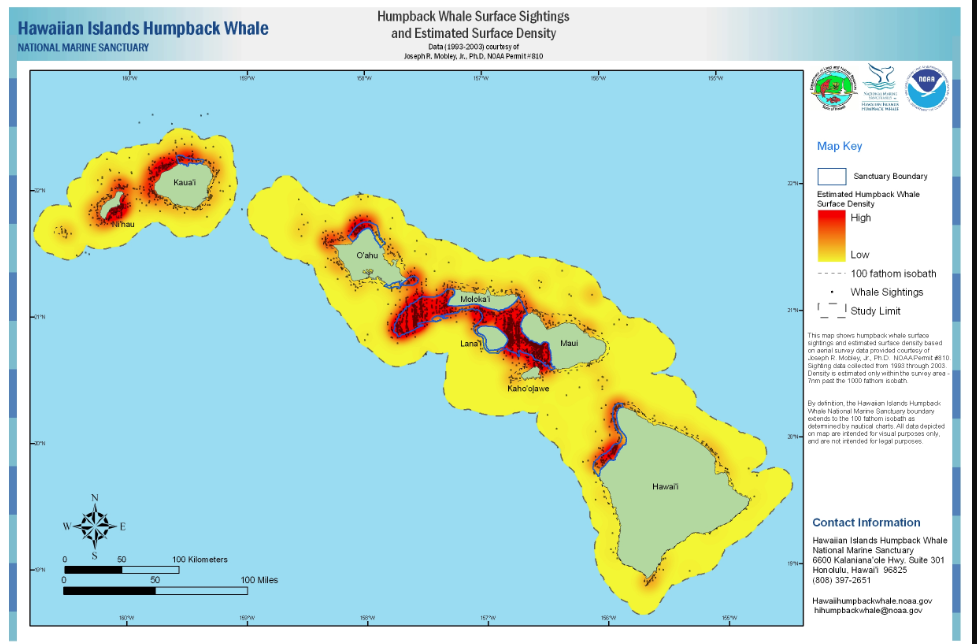 The best place to see whales in Hawaii Maui is throughout the south and west coast, the west coast being the location with the most whale activity.

The south coast of Maui includes the Wailea, Kihei, and Maalaea areas, there are many resorts, condos, and beautiful beaches in these areas and you can often see whales from shore during peak season! There are also whale watching tour charters that leave from both the Kihei boat ramp and Maalaea to take guests whale watching on the water.

The west coast of Maui includes Lahaina, Kaanapali, Kahana, Kapalua, and Napili, also with great beaches and accommodations and it is the best Island to see whales in Hawaii. Because humpback whales migrate to Hawaii for mating, giving birth, and raising their young, the amazing reefs along the west coast of Maui, specifically Lahaina, are go-to spots for humpback whales!

Olowalu Reef is the oldest and largest reef system in Hawaii, spanning 1000 acres along the west coast of Lahaina, Maui. Olowalu Reef is a shallow safe environment, making it the go-to nursery for mama humpback whales and their calves.

Male humpback whales spend their time in Maui seeking a female to mate with. Even if the female is about to give birth or has a young calf, the male will take his 5% chance of mating. We call these male whales, Escorts. You will often see these small whale groups and hear naturalists refer to them as mom, calf, or escort. The escort is not the father of the calf traveling with the pair.

Other whale encounters you may have would be a group of whales called a competition pod. These competition pods include 1 female and multiple male whales, 2-50 males or more, all competing for the mating rights of the female. Using their flukes, rostrums, and pectoral fins, these males will compete and fight for the dominant position through aggressive behavior towards each other. Solo whale sightings are also very common, and most of the whale songs we hear are of solo whales.

All of the loud whale songs we hear are sung by adult male whales. Scientists are still working to discover the reason for whale songs, what we know now is that the song changes every year and is the same song sung by every whale! Other whale surface behavior you may observe include breaching, spy hopping, tail slapping, pec slapping, head lunges, and muggings! Humpback whales are amazing gentle giants, don’t miss an opportunity to encounter them!

If you can’t make it to Maui, which is the top location to see whales in Hawaii, then check out these other island whale-watching spots!

On the island of Oahu, you can see humpback whales along the coast of Honolulu and the Northshore, taking boat tours will increase your chances of whale encounters.

Big Island hosts humpback whales annually as well, most of the sightings along the west, and the northwest coast of Hawai’i. Tours out of Kona or Hilo will get you those closer whale encounters.

For more maps and information on the humpback whale migration to Hawaii, check out https://hawaiihumpbackwhale.noaa.gov/documents/maps.html.

which Hawaiian island is the best for whale watching?

In season, Maui is the best place to see humpback whales, but other islands also have many whales to see. The islands of Kauai, Oahu, and Big Island offer great whale-watching tours.

Which is the best place for whale watching in Hawaii?

Hawaii is known for its whale watching along the Kohala Coast and in Hilo Bay, on the island’s east side. Another great viewing spot is Puukohola Heiau National Historic Site with its elevated, sweeping views.