Save Maui’s Manta Rays Team just sent out an update on their tagging research. We are grateful to be a part of their research team by donating the Wildlife Tag to help support ray research and learn how to better protect our marine ocean life! 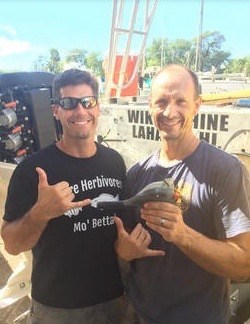 “On May 1, 2015, an adult male manta ray that we named “Ultimate” was tagged with a Wildlife Computer Satellite Tag generously donated by Lee James and Ultimate Whale Watch. This tag was equipped with state of the art “FastLoc” technology for recording GPS quality position data each time the tag antennae reaches the surface.

In addition, the tag records temperature and depth data providing valuable insights into the manta’s dive profile. Combining GPS and depth data helps us to better understand how the manta rays are using their habitat both horizontally and vertically.

The tag was programmed to release from the animal after 100 days but released prematurely after 17 days. The reason for the premature release is unknown but it came off 300 yards offshore of a famous Ulua fishing location. Considering that 10% of Maui’s mantas show evidence of entanglement in Ulua fishing gear, it’s very possible the tag got entangled and pulled from the animal at this location. The data revealed extensive vertical migrations including hours spent at 485 feet.

A second tag, generously donated by the Marine Megafauna Foundation, with assistance from Dr. Fabrice Jane, was deployed on an adult male on May 2, 2015. This tag also released prematurely after 50 days off the West side of Molokai over the famous “Penguin Banks”. This manta was recorded diving to a depth of 840 ft.

The “Ultimate” tag was redeployed in January of this year on the smallest manta ray we have seen yet, observed feeding inside Maalaea harbor. The tag only stayed on for 2.5 hours but revealed where we suspected to be the mysterious nursery area in front of Sugar Beach. Young manta rays segregate from the main population so these data provided insight into where this nursery area may be.

Discovery Channel Canada is interested in documenting our third deployment of the “Ultimate” tag – so stay tuned.
We hope to continue to unravel the mysteries of what critical habitats are important for Maui’s manta raysand how these habitats are being used for feeding, cleaning and reproduction. This work could not be completed without your generous support so from the HAMER team and Maui’s manta rays, thank you for your continued support!